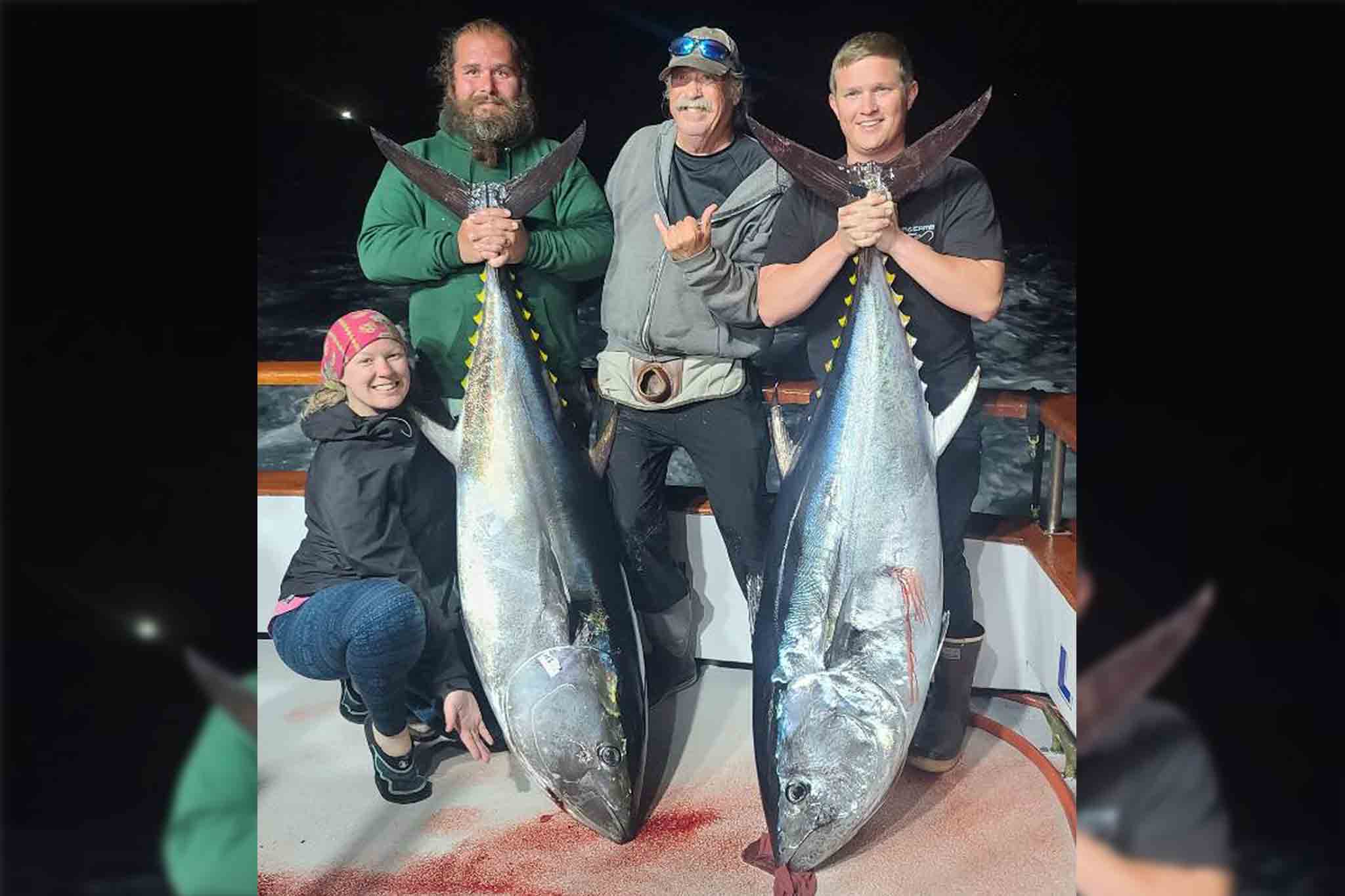 “We returned this morning with limits of Bluefin and 22 yellowtail. These bruisers weighed in over 160 each.”

salt water: Decent seas and a great bluefin bite all week kept most of the San Diego fleet concentrated off the Baja coast in an area centering 25 miles off Ensenada. Some of these fish are close enough to the beach for pangers out of Ensenada and San Quintin to go out and get them. After weeks of 20 to 50-pound fish and a spritz of larger grade fish in last week’s count, this past week had numerous larger models to over 200 pounds caught, raising the average weight substantially, and eliciting pleas by sportboat crews for anglers booking tuna trips to bring the heavy gear.

For a while, recommended gear was middle-weight 30 to 40 pound setups, with most of the tuna being smallish. With the return of the big cows, captains are emphasizing the need for a 100 to 130-pound setup in the quiver. If booked on an upcoming full-day or longer trip heading to the tuna grounds and you don’t have a heavy setup, the boats will have rentals on board. Over the past two weeks the bluefin count shot up dramatically, even so, many anglers were caught unprepared as 50-pound fish suddenly became 150-pound fish. Anglers were pinned to the rail for hours only to experience the thrill then heartbreak of fighting a massive fish until being chewed off before getting it to gaff.

The current tackle recommendation for bluefin trips is to bring three setups, including a 30-40 pound fly-line setup, a 50-80 pound jig setup, and a 90-130 pound setup. Terminal tackle recommendations include plenty of hooks and weights for live-bait fishing on the sinker rig and fly-line, and knife or butterfly jigs between 150 and 300 grams have been working best for yoyo fishing. These fish are showing no signs of letting up, and anglers are filling spots quickly. If booking a trip and finding few available spots, check with all landings as more boats are coming online after winter/spring boat work. Also, another addition to the fleet is here! the Oceanside 95 has moved down to work out of Point Loma Sportfishing and is running 1.5-day trips beginning Wednesday, May 11.

My ‘ghost radar’ seems to be working okay this year, as last week I called for white seabass to show soon and lo and behold, the first local white seabass of 2022 was reported caught aboard the New Seaforth‘s afternoon half-day run on Monday. Often called gray ghosts, white seabass frequent our nearshore area kelps from spring through the summer, often getting to 50 pounds or more. They are solid fish with firm meat that cooks up well whether baked, broiled, grilled, or fried. The flats just off the La Jolla kelp in 80 to 120 feet of water can be a great area for them, especially if market squid show up. In one summer, I managed 30 white seabass over 35 pounds from the kayak while fishing just outside the reserve in La Jolla. Most of those fish were caught using a fly-lined live mackerel slow-trolled just outside the kelp edge, though a few bit on irons, both on the surface and dropped deep. As the season turns, I expect to see more ghosts in the counts, and calico numbers rise as rockfish numbers wane while local boats adjust their focus higher in the warming water column.

Further south in Baja, the mid-peninsula Pacific side has been heating up with yellowtail beginning to show outside the cool-water trend that runs along the coast from Guerrero Negro south to Punta Abreojos. Though yellowtail won’t show in any numbers within ten miles of shore in the coolest part of that zone, they are being caught on the north and south end, which points to a good season there. Usually about three months behind San Diego in fishing seasons, that area will host thick schools of yellowtail through winter until around March, with the best fishing being September through December.

Once south of the cool water trend, yellowfin tuna and wahoo are the main targets for those fishing reefs and islands along southern Baja to Cabo. Coming up the Sea of ​​Cortez side, roosterfish are going off for anglers fishing out of La Paz, with some smallish yellowfin and good snapper in the mix. Loreto is still all about yellowtail and premiered their first annual Pink Promise Women’s Fishing Tournament over Mother’s Day weekend, with over 60 women-only teams totaling 230 anglers competing. The first place team, The Biting Cables, weighed in a three-fish accumulated weight of 81.2 pounds and took home 50,000 pesos ($2,477 USD). Second place finishers, team Sea-Noritas, won 30,000 pesos ($1,486 USD) with an accumulated weight of 78 pounds, while team Nautilus Girls captured third place and 20,000 pesos ($991 USD, with their top three fish totaling 70 pounds.

Organizers expected maybe 30 teams and were happily surprised by the huge turnout. As with most Baja tournaments, the weekend began with a youth shore-based tournament, this time just for the girls. All in all, it was a great start for what will hopefully become a Mother’s Day tradition in Loreto. From Loreto north to the upper reaches of the Cortez, yellowtail, sierra, grouper, and corvina are showing well for anglers fishing out of Mulege, Santa Rosalia, and the bays: Bahia de Los Angeles and Bahia San Luis Gonzaga. With a plethora of bait and fish hot to bite, the only trick this time of year in the mid and upper Cortez is finding a fishable flat spot between seasonal north wind blows.

From San Diego south through the ‘other two’ Californias, this spring’s fishing has been great and will only get better as summer approaches, so go get ’em!

Remarkable catches this past week:

5/6 – The Excalibur fishing a 1.5-day trip with 24 anglers aboard reported limits of 48 bluefin tuna, 3 yellowtail, and 1 bonito caught.